This is a republication from the last record year of wildfires in California, 2018. 2020 has surpassed the 2 million+ acres of burned land in 2018 with more than 4 million acres destroyed this year! This content is more relevant than ever. (Jim Langman) 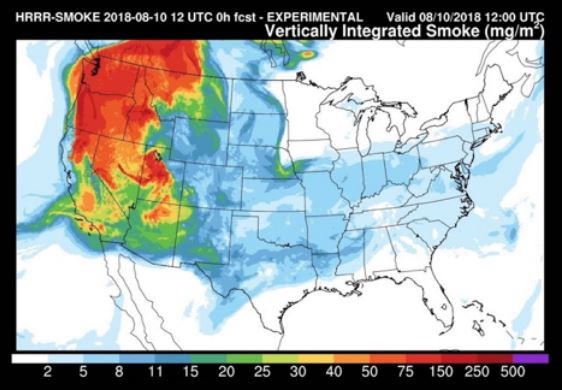 The satellite image above was created by the National Weather Service, (NWS), the same week we were in wine country last month. It shows the upper atmosphere concentration of smoke particles generated by the large fires in California and several other western states. There is visible smoke from coast-to-coast and is evident in almost every contiguous state in the U.S.
You can see a dark orange finger of color cutting right down the center of the northern border of California. Two of the seven largest fires ever recorded in California that are burning this year in northern California are causing most of this smoke concentration. The largest fire ever recorded in California, The Mendocino Complex Fire, has been burning for months and is still not fully contained, has already burned 470,000+ acres. (Source: Cal-Fire) This fire is burning about 40 miles north of Napa Valley and Sonoma County. About 100 mile north of the Mendocino Complex, The Carr fire burnt 230,000+ acres before it was contained last month. (Source: Cal-Fire) We are blessed that our vineyard is at 2,400 feet elevation, in the Sierra Foothills which is right in the middle of the large green streak on the eastern border of the center of the state in the image above.

What does this all mean?
The rest of his article will have 2 parts: How does this much smoke effect a vintage’s grapes and wine and some hard data and facts about California fires. The first part, I hope, you will find interesting and informative. Everyone will probably be mad at me about the second part. That is not my intention, but I do accept the responsibility to present the facts and a viable effort to partially mitigate the yearly fire battle that happens every summer in California.

Smoke Taint
Exposure to heavy smoke for an extended period of time can allow the chemicals in the particulate matter from the smoke to be absorbed into the skin of the grapes. In 2008 there were some large fires close to Napa Valley and smoke taint did effect the thick-skinned, slow-to-ripen Cabernet Sauvignon grapes, which did, in turn, effect the quality of wines in multiple wineries. This could be a challenge this year in Sonoma county and again in Napa Valley.

Fining and Filtering are the processes that wine makers use to eliminate most smoke taint from their wines. These aggressive processes, to varying degrees, will also usually dilute the wines complexity and taste. The wines are enjoyable, but not as robust as usual.

Fining is the technique where the wine maker will add an adsorbent to wine in tanks or barrels. These inert compounds literally attract the volatile phenols and creosol chemicals out of the wine and into their chemical structure, (not exactly the same, but think of a sponge absorbing water off kitchen counter), and then the adsorbents are then removed from the wine. Using activated carbon or synthetic mineral fining compounds has shown to remove between 50 and 70% of the smoke taint chemicals from the wine.

Very fine micro filters can also be used after the fining process. These can remove very fine chemical particles, but the trade off is lower viscosity and concentration of wine particles. Science and the wine makers experience and skill in these decisions is one of the big ways that prove an excellent wine makers prowess.

Most wineries in the Sierra Foothills will thankfully not have smoke taint this year. But this years massive fires have had a different effect on our area by effecting the weather. The smoke in the upper atmosphere has filtered the intense sun that normally results in daytime August temperatures in the mid 90’s and have resulted in most of our August afternoons peaking out in the high 80’s.These cooler temperatures have allowed the start of “veraisin”, the change of color of the grapes from green to dark blue/purple, to happen about 3 weeks earlier than normal. Veraisin signals the onset of the final stage of grape maturation and the beginning of “ripening” of the crop. The grapes will concentrate complex pigments in their skin, increase sugar in the juice and and be ready for harvest about 6 weeks later. (Veraisin is also the favorite time of the year for birds to visit the vineyards and feast on very expensive grape clusters!) Last year we were harvesting into the first week of October. This year we will most likely be finished with harvest by the 3rd week of September. This is not a bad thing. Every vintage of wine has its unique characteristics!

Hard data about California fires
I am a Pharmacist by education and licensure and for decades, have followed the “Scientific Method” and “Evidence Based Medicine”, to construct and/or administer, “Patient Care Protocols”, to treat patients with the treatment regimen that has the highest likelihood of success for that specific patient and their specific needs. Clinicians, of all types, can not use emotional decisions nor superficial knowledge to responsibly and safely take care of their patients. This section is not meant to be published in a peer reviewed journal. I am simply presenting hard data on some macro issues and humbly submitting a partial mitigation proposal. I will give example of both sides of the argument wherever I can.

“There are more and more horrible fires, every year in California and the planet and this is direct evidence of, and directly caused by, Global Warming!”
Fact- These are horrible fires. Absolutely no question about that. So far this this year, in California, there has been at least 5,600 fires, that have consumed 900,000+ acres, burned 1,000+ homes and killed at least 12 people, including 4 firefighters. (Source: Cal-Fire)

“…more and more fires every year…”
Fact- The state of California since the year 2000 has averaged 8,100 fires/year, with an annual average acreage burned of 640,000 acres. These number fluctuate year to year with no evident multiyear-trend up or down. (Source: Cal-Fire)
Fact- The entire U.S. had 3,900 fewer fires last year than the 10 year average. The total number fires and burned acreage fluctuates every year and shows no multiyear trend over the last 20 years. (Source: NIFC)
Fact- On a global basis, the total Global Burn Area for the decade of 1900-1910 was 43% higher than the decade of 2000-2010. This downward trend has been happening for 100 years. (There is a lot more to unravel here, I get it! ) (Source: Bio Science Journal of Geophysical Research)

“…direct evidence of Global Warming…”
First side- “Thousands of scientists agree that there is global warming and the earth is 1.8 degrees Fahrenheit higher than it was 70 years ago.”
Second side- “You are looking only at a relatively short timeframe of temperature measurement that is only part of a much larger and longer natural cycle that the earth constantly goes through.”

Fact- The last 15 years on California has seen some higher temperatures and dryer winters on average. The snow pack on the mountains has not been as deep and this reduces the spring/summer runoff much earlier in the year.
Fact- This is too short of a timeframe to make an absolute judgment about Global Warming

“…these fires are caused by Global Warming…”
Fact- The first 17 major fires in California this year were caused by humans, not lightening strikes. (Also, these forests do not spontaneously combust!) Human causes include downed power lines, machinery, careless smoking and/or campfires and arson. Arson has averaged about 350/year for the last 20 years in California. (Source: CalFire)
Fact- In California from 1910-2017, 95% of all fires were caused by Humans. 5% were caused by lightening strikes, mainly in the rural northeast corner of the state. (Source: U.S. Geological Survey Western Ecological Research Center)

“If the number of fires and the acres burned only fluctuate year over year, and are not on an upward trend, why don’t we just leave mother nature alone and do nothing.”
Answer: Humans!
Fact- The fires last year in California, killed at 27 people, destroyed 4,800 homes, cost $773 million in fire fighting expenses and $1.8 billion in damages. (Source: Cal-Fire)
Fact- The number of residents in California in 1980 was about 24 million. Today, it is about 40 million. (Source: U.S. Census)
Fact- From 1940-2010 the number of homes potentially in the path of wildfires has risen 1,000+ %. (Source: National Hazards May 2018)
Fact- 1/3 of the population, about 13 million people, in California now live in the “Wild Land/Urban Interface”. Summer in California is the worst place in the world for fire climate. (Source: J. Kelly UCLA)
Fact- California is the driest state in the U.S. during the summer months. (Source: NWS) 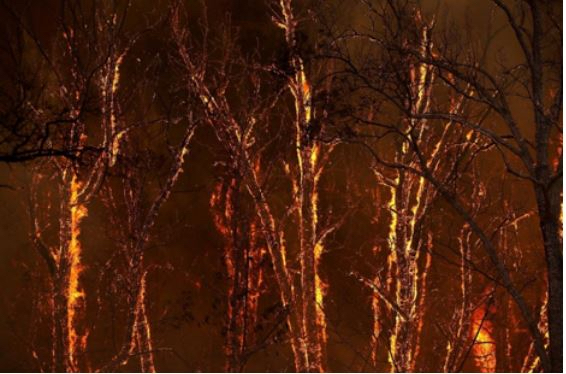 What could we/should we do?
Doing nothing is not the answer. There are at 13 million people in California who live in potential wild fire danger. I am not going to argue about how we got here, but we are here. Can we introduce some responsible forest management back into these public lands?  Many people agree that Hazardous Fuel reduction is the most effective way of reducing the frequency and today, the intensity of these major fires. How we do this is where the disagreements start. Dead tree and underbrush removal, controlled burns, reopening some of the forests to responsible commercial logging are all hotly debated.

First side- “The forests have burned and renewed for as long as earth has existed.”
Second side- “There are millions of people at risk!”

First side- “You produce more CO2 into the environment when you artificially reduce hazardous fuel and/or back burn and/or allow logging than the fires produce, because only about 10% of the available carbon is released in a forest fire where only dead trees and underbrush are burned. The fire does not go past the bark of healthy trees.”
Fact- Commercial logging had a 150 year history of “cutting and running” in many parts of our public forests. There were many destructive environmental effects of these unregulated and unenforced times. Modern regulations, equipment and processes have proven to be a sustainable environmental and business model on the private lands where most logging occurs today. Is this absolutely perfect? Absolutely not. But we have come a long way,
Fact- Most commercial logging on public lands in California was stopped 40+ years ago.
Fact- A healthy forest has about 40-60 trees per acre. Many of the fires now burning in California are burning on public land that has not seen Hazardous Fuel reduction in 40 years. These lands now have 100-200 tress per acre, as well as an enormous amount of dead trees and underbrush. Combine this with everything else we have covered and you can see why the intensity of these fires is staggering. Many parts of these large fires are now burning an estimated 50-75% of available carbon in these raw forests. The fire is burning through the bark and killing many large trees. This type of destruction can mean that a forest will take 75-100 years to return to its full health. (Source: U.S. Forestry Service) Doing nothing is absolutely incorrect. 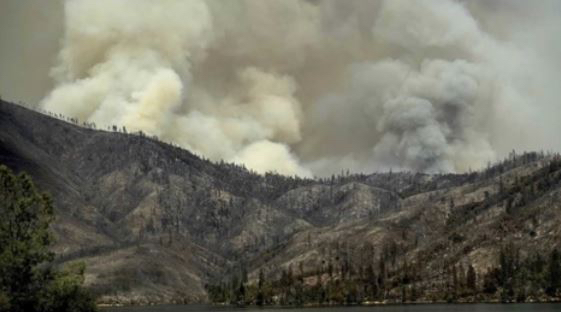 Doing the same thing we did 40 years ago is absolutely incorrect. Absolutes on either side of the points of view on this problem are not based on facts. We must strike a balance that is good for the humans in danger, good for the environment and good for the economy.
Okay, now that you are all mad at me, please remember that I am a Pharmacist and grape grower. I absolutely know that I have not covered everything, but I do know that we must formulate a responsible plan for Hazardous Fuel Reduction in our forests.

Commenting has been turned off.

Keep up to date on the latest wine releases, events, and promotions and get 10% off your next order.